12 STEPS OF DIVORCE: Step 2 – Responding to the Petition for Dissolution 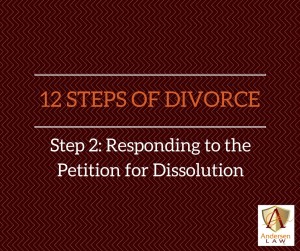 Step 2 – Responding to the Petition for Dissolution

Former college buddies Art Aingel and Draco DeVille seemed to have less and less in common over the years — that is until they both found themselves on the receiving end of their respective wives’ divorce filings. Draco’s came first, so he was into the process sooner and had plenty of so-called “pointers” for his friend Art.

The two met at the corner sports bar for wings and beer. Or, in the case of Draco, four Moscow Mules.  Art explained that he had agreed to waive service of process of his wife’s divorce papers. After receiving a request to do so from his soon-to-be-ex wife’s attorney, he met the attorney at her office, presented his driver’s license and, in front of the attorney’s legal assistant who was also a notary, signed for and received his copy of the summons and petition for dissolution of marriage. The only difference it made was that Art would receive the papers from the attorney instead of being served by a process server. It seemed to make practical sense.

“Well, whatever you do, don’t hire an attorney,” Draco continued. “You can do this all yourself. Save a bundle. Or hire a mediator, which is the exact same as an attorney, but cheaper and, get this, represents both of you. Oh, and do not put in a response. Don’t have to! I just saved you about $199 in filing fees right there and all you have to do is buy the next round!”

Art was able to talk Draco into letting him drive home, the two of them returning to pick up the car in the morning. Fortunately, the next morning found Draco a quieter version of himself, a bit green in the gills, giving Art some time to think over Draco’s suggestion that he go the divorce process without legal help.

But Art did some of his own research online. This included visiting the Jefferson County Self Help Office where he received the form for a Response to Petition of Dissolution, which he could complete himself, forms for ominous sounding things like sworn financial statements and certificates of compliance. Art could not figure out why the court needed to delve into his private finances, but soon learned that this information was part of the process. Parties had to turn over this information to each other in order to calculate maintenance (sometimes known as spousal support or alimony), child support and division of property. Art had the feeling his wallet and bank accounts would be much lighter soon. He did not like the idea of paying an attorney on top of it.

Art turned to the Jefferson County Self Help Office’s list of discount attorneys willing to handle his case on an unbundled basis. He also asked around for names that his friends recommended. Draco had suggested his wife Desdemona’s attorney, David Lee Buttermaker. It turned out Angela had beaten him to the punch. Buttermaker was “conflicted out” having already had a free consult with Angela. Art did not mind this actually. Buttermaker struck him as slick and self serving. Art decided these instincts were correct when he researched the attorney at the Colorado Supreme Court website and discovered the attorney once had been suspended from the bar for “commingling funds” and had a list of complaints on AVVO, including disgruntled client after client claiming Buttermaker had “churned the case” by angering both parties, urging them into trial and then enriching himself with exorbitant fees.

Art was skeptical about the online client tirades. After all, he assumed, most people were probably in a bad mood after getting divorced and looking for someone to blame.

Art was discussing his attorney issue and that he had found some disturbing things about Buttermaker. Art’s boss said it was good that Buttermaker couldn’t help Art and that the attorney should be avoided at all costs. Apparently, Buttermaker had represented his boss’ wife Victoria’s former husband in Victoria’s divorce. Proceedings revealed that Buttermaker had run up $100,000 in attorney fees, placing a lien on the marital home in order to ensure he would be paid. The case ended up with most resources in the possession of the attorney and both parties in bankruptcy. More disturbingly, Buttermaker himself had handled the husband’s bankruptcy despite the fact that he was a creditor and the fact that the husband at that point was “judgment proof” (owned nothing) and did not need to file bankruptcy. Both parties had attempted to sue Mr. Buttermaker as well as taking action against him. In the end, the parties did not have the resources to seek relief against Mr. Buttermaker in court.

Information like this made Art concerned about hiring an attorney. It was shocking that this man was still practicing, much less representing Desdemona DeVille and coming close to representing his own wife.

Nonetheless, Art decided that one bad apple did not mean all attorneys are corrupt. He called the first name on the list of discount attorneys. He spoke to an attorney who offered a reasonable $2,500 retainer, $225 hourly rate and a free telephone consult. Art liked what he heard and decided to hire this attorney. He had enough on his plate with his engineering job and needed someone to handle the bulk of the divorce work. His new attorney said her fees ran about $1,000 to $2,500 per month depending on how busy the case became. In comparison to Buttermaker’s six figure divorces and the toll hours of divorce work and research might take on his job, Art decided to hire the attorney for full-service representation.

His new attorney had several answers for his concerns and disputed many of the things Draco DeVille had said. She explained that while mediators can explain aspects of the law and can talk about their experiences with certain legal issues, they cannot give legal advice. This meant that a mediator could show Art the maintenance statute, but could not explain strategies for furthering Art’s best interests in a contested mediation or hearing on that issue. Art knew a lot of money would be at stake. He needed someone who knew the law, knew how to fight for his rights and would have his back. This is why he elected to hire an attorney.

As for filing a Response, the attorney explained that Art might want to file a Response to the Petition for Dissolution of Marriage in order to contest certain facts. For example, Angela had listed the marital date as five years prior to the date of their marriage ceremony, claiming they had been common law married during that time. This could cost tens of thousands of dollars in both maintenance and division of property. Angela also sought to be primary parent with Art exercising every other weekend. By filing a Response, Art could contest both issues and point out facts in his favor. Having pleaded these issues would help Art at hearing, according to the attorney.

Angela, was hard at work on her sworn financial statement, disclosures and was taking a parenting class. She suggested that she and Art take the class together so they could work toward cooperatively co-parenting. Desdemona DeVille stopped by hoping to talk Angela into a trip to the Cherry Creek mall. She laughed at Angela’s claim that she was too busy for shopping due to working on her divorce.

“Oh for Pete’s sake!” Desdemona rolled her eyes. “You don’t need to do all that stuff. Just tell them that Art took all the financial papers when moved out and you can’t get them. That’s what I did.”

“But my disclosures and sworn financial statement are due soon which means yours are long overdue. Didn’t your attorney tell you to work on this?” Angela asked.

“Oh sure, but who cares? His paralegal, who is super annoying by the way, keeps calling and emailing and telling me to get my bank statements and tax junk but I just dodge her calls. Buttermaker can figure it out. That’s what I pay him for!” Desdemona waved away her disclosure obligations with a sweep of her hand.

“How can they do their job if they don’t have your personal financial information?” Angela asked. “This is private information and not publicly available. Our attorneys count on us to get it for them. And my attorney said we could face a Motion to Compel if I do not do these things on time.”

“Oh, my attorney said Draco filed one of those silly motions to compel or whatever but who cares? Let the attorney fix it. I have better things go do. And same goes for that parenting class. I am a great mom. I don’t need classes. Ha! Well, I’m off to Nordstrom’s. Have fun doing your homework, Miss Nerdypants!”

QUESTIONS FOR NEXT MONTH: Should Angela continue working away on her disclosures and sworn financial statement or does it make sense to get an extension? Does she have a legitimate claim that she does not have ready access to the information? Does it make sense for divorcing parents to attend parenting class together? What is a motion to compel and why should a divorcing party care?