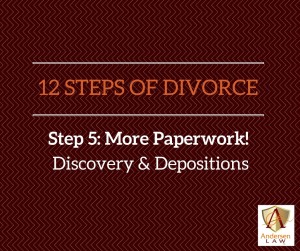 More paperwork! Angela Aingel could not believe she had more financial and parenting “homework” to do. Her attorney had explained to her that she would need to serve DISCOVERY on her soon-to-be-ex-husband Art.

“We already did all that financial stuff!” Angela complained to her attorney.

“Those were the MANDATORY 16.2 DISCLOSURES,” the attorney explained.   This is DISCOVERY.”

“What’s the difference?” Angela asked, wanting to hear the explanation as to why she was forced to jump through all these hoops, as if the emotional stress of divorce wasn’t already enough.

“Think of it like a game of cards,” her attorney said. “Disclosure is like poker when you are dealt cards face up for everyone to see. The other party sees the information without having to ask. Discovery is more like Go Fish. You have to ask to see a card, for example, ‘Do you have any aces?’ Except, you are asking things like, ‘Do you have your last year of credit card statements, check registries and bank statements?’ ”

“You are going to want to see certain documents and ask certain questions of the other party,” the attorney continued to explain. “These things will help divide assets and debt, figure out child support, maintenance and parenting time. INTERROGATORIES are questions and DOCUMENT REQUESTS, just like they sound, are written requests to the other party asking them to provide you with copies of documents.”

“Isn’t that what a subpoena is for?” Angela asked. “To get documents?”

“Well, that is a good thing about discovery,” the attorney answered. “You do not have to subpoena the documents. You simply serve the written request on the other party or attorney.”

“I don’t even know where to start!” Angela exclaimed.

“Colorado judicial forms include PATTERN INTERROGATORIES AND DOCUMENT REQUESTS for divorce. That is always a great starting place,” the attorney explained. “And no one can object to the form or content of pattern discovery requests.”

“Why would anyone object to discovery about the divorce?” Angela asked.

The attorney sighed. “These requests are limited to requests reasonably calculated to lead to the discovery of evidence admissible at the hearing. They must be asking about things that are relevant to your case. It is not a free for all. You would not believe what some people ask and demand!”

Shortly after this conversation, Angela received an email entitled “discovery and depositions” from her friend Desdemona DeVille, who was also going through a divorce. Angela had reached out for some help preparing these documents and Desdemona, who was further along in the process, was happy to oblige. After looking through her friend’s suggested questions, Angela felt more confused than ever. Desdemona seemed to think discovery was a free for all, given all the topics she raied. Angela decided to give her friend a call.

“I just don’t know about these questions,” Angela told Desdemona. “They don’t seem to have anything to do with the legal issues of divorce.”

“Of course they do!” Desdemona shouted into her phone. “And besides, when else are you going to get the chance to grill him like this?! And make sure you set up a deposition. That is a great chance to really rake him over the coals!”

“Here are some killer questions and document demands for your discovery,” Desdemona had written in the email, followed by: “Who are you sleeping with? What drugs, legal and illegal, including marijuana/THC (medical and rec) do you do? When did YOU aka the testator stop getting drunk every night, before or after petitioner aka ME/I filed for divorce? Why is the affirmant heretofore a lying and cheating SOB? Why should I even let the kids see you anyway? Where are YOU (aka declarant heretofore) hiding all your money including account numbers and amounts and loose bills and coinage? Why are all men liars? Provideth this honorable court with copies of any texts, notes and Facebook messages you have ever sent to any hoochies for the entirety of our aka the PARTIES’ marriage. Provide forthwith passwords to all online dating accounts and list of all women contacted therein heretofore.”

Angela sighed. “It seems like mumbo jumbo to me. Where did you find this stuff?”

“Those are GREAT questions, girlfriend. You should pay me!” Desdemona insisted. “I mean, I think the verbiage rocks and speaks for itself res ipsa loquitar.”

“What does that even mean?” Angela asked.

“Legaleze. I’m great at it!” Desdemona said proudly. “Remember, when I was in my 20s, I was a temp receptionist at a law firm for several days between modeling gigs.”

Angela sighed, sounding surprisingly like her attorney. Angela wondered if Desdemona’s questions were the type her attorney had been thinking of when she said Angela would be surprised at what some people ask.

“The interrogatories and document requests should be about things that are relevant to the case,” Angela tried.

“They most certainly ARE!” Desdemona’s voice shouted out from the cell phone. “What could be more relevant than whether that good-for-nothing cheated on me … I mean on you, of course.”

“It is a no fault state,” Angela said. “Infidelity is not relevant. The judges do not want to hear about it.”

“What the what?!” Desdemona shouted. “Judges not caring about who is the biggest loser and who is the winner in the divorce? What is this world coming to? I am going to pretend like I did not even hear that.”

“OK, well you need to do what is best for you. As for me, I am going to listen to my attorney. What is the point of paying her if I throw her suggestions out the window?” Angela said.

“Does the term ‘hired gun’ mean nothing to you?” Desdemona persisted. “We hire these pricey attorneys to destroy the enemy!”

“Oh, Des,” Angela answered softly, but Desdemona was off on a rant and not listening.   Angela had hired her attorney for sound legal advice and to get the process done as expeditiously and fairly as possible. Sure, she wanted maintenance and child support to help her get started on a career, to provide for the kids, but it was not her goal to destroy Art. He was the father of her children. He would be in their lives forever, and to a degree, in her life as well. Vendetta had never been her style. That sounded more like … well, it sounded more like Desdemona actually.

As she had thought before in earlier stages of the divorce process, Angela thought she should listen to what Desdemona said to do and do the opposite. Desdemona’s advice about refusing to agree to a Stipulated Case Management Plan in order to wreck the men’s bike trip had turned out to be bad advice costing Art and her unnecessary attorney fees. They could have accomplished the same things by agreement instead of going to court.

Angela addressed the task of preparing questions and document requests for her non-pattern discovery requests. She asked about details surrounding Art’s pension and retirement account. She asked about passwords for some accounts and about a “mystery checking account” where she only knew of the last four digits. She sure hoped that Art was not hiding money in that account.

Angela’s attorney crafted her handwritten questions into NON-PATTERN INTERROGATORIES and DOCUMENT REQUESTS, which she served on Art. Within a day, Art served Angela with his own set of the same Discovery Requests. Her attorney said she had 35 DAYS TO RESPOND. She worked hard to meet the deadline with a timely response, getting her documents to her attorney a week ahead of the deadline so they had time to formalize their answers and bate stamp and organize the documents to be provided.

Art Aingel similarly responded to Angela’s Discovery Requests within the 35-day deadline to respond. He served her with a formal RESPONDENT’S RESPONSE TO PATTERN AND NON-PATTERN INTERROGATORIES and RESPONDENT’S RESPONSE TO PATTERN AND NON-PATTERN DOCUMENT REQUESTS. Angela found his answers informative. It was reassuring to find out the “mystery checking account” was a closed account that did not have funds in it. It was also reassuring to find out that Art had continued to pay the mortgage and household bills on a timely basis.

Desdemona said that Draco had immediately stopped paying the mortgage and all the household bills when she filed. This had resulted in an emergency temporary orders hearing. Desdemona bragged that she won her attorney fees in that attorney. This could not prevent Angela from thinking that just meant she got back some of the money she had paid in the first place, not to mention the stress and time commitment.

Desdemona said that they also had MOTIONS TO COMPEL, TELEPHONE CONFERENCES WITH THE COURT and more hearings when each of them failed to respond to discovery requests on a timely basis. All of this just sounded like a waste of time and money to Angela.

Angela also asked her attorney about the possibility of a DEPOSITION. The word sounded ominous: she had heard it was pretty much the same thing as a trial.

The attorney explained that a deposition was an opportunity to ask another party, or a third party, questions under oath. Depositions were recorded, usually on video, and were then transcribed and made into a written transcript. The good news, the attorney reported, was that depositions were rarely needed in a relatively straightforward divorce like the Aingels’.

Angela was relieved about not needing to do a deposition. The attorney stated that it was up to Art whether he wanted to depose her. Angela hoped he would not. The longer the divorce went on, the more she wanted the process to be done. Maybe Desdemona enjoyed prolonging the drama with depositions and one hearing after the next, but for Angela, a settlement was sounding more and more like a good idea.

Meanwhile, Angela’s husband, Art, was on the telephone with Desdemona’s soon-to-be-ex-husband Draco De Ville. “Draco, all these experts I am hearing about: CFI, PRE, RE appraiser, vocational evaluator, business appraiser, it just goes on and on! I cannot afford to pay any of these people! And who are they anyway? It sounds like alphabet soup!”

“Well, you came to the right guy,” Draco answered. “Hire all of them and then just get your attorney to get your wife to pay for them! That’s what I am going to do. Why not stick it to her? Oh, and if they do make you pay half of the fees, just throw away their invoices and refuse to pay them.   What’s she going to do? It all comes out of the same pot anyway!”

“Got it,” Art said, thinking to himself, listen to what Draco says and do the opposite.