12 STEPS OF DIVORCE: Step 1 – Serving and Filing a Petition for Dissolution 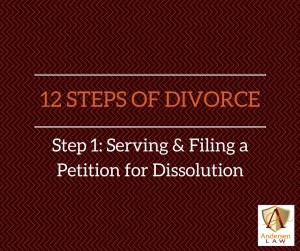 “I cannot take another year of Art living in the basement,” Angela said, her chai latte trembling in her hands, her eyes brimming with tears. “He won’t even talk to me and three years of marital counseling has not helped one bit. It’s time. I have decided to file for divorce.”

“Well, I say it’s high time you join the club,” Desdemona grinned, hitting a key on her new iPhone. “Here, talk to my attorney, David Lee Buttermaker. He’s the best! We are both going to take those cheating slobs to the cleaners! David Lee says I may never have to work a day in my life.”

“But you love your real estate career!” Angela gasped.

“Who cares?! I quit,” Desdemona laughed. “I am going to love cleaning out Draco’s Roth to pay for a trip to Aruba with Danny a lot more. I met Danny on Tinder. He’s 29 and hot!” Desdemona held up a picture on her phone of a fit young man on a mountain bike. “Now, talk to Buttermaker!” She passed the iPhone to Angela with the attorney already on the line.

Angela attended the free initial consult with attorney Buttermaker. He quizzed her about the couple’s income and assets, promising that Angela would not need to leave her beloved situation as a stay-at-home mom and would likely have her husband supporting her, as well as paying all her legal fees and keeping her in the lap of luxury in the marital home.

“Oh, and don’t let him see much of the kids. Tell them he never loved them and that he cheated on you,” Buttermaker said.

“But those are lies, and adult ones at that,” Angela protested. But Buttermaker ignored her.

Angela felt uncomfortable with his polished bravado and the fact that he shouted out sky-high promises without asking much about her or she and Art’s situation. In fact, Buttermaker never looked her in the eye, not even when he asked her to sign a document allowing him to place a lien on the marital home and then urged her to go the bank and liquidate her IRA in order to pay his $20,000 initial retainer. “Oh, and keep some for a manicure and massage,” he urged as she left. “Divorce is stressful enough after all he put you through. You need pampering and leave the rest to me!”

Shaken, Angela instead did some research on the computer and discovered that she could get free advice from the Self Help Clinic at the Jefferson County Courthouse, as well a list of discount attorneys. She selected an attorney who offered unbundled legal services (i.e. paying as you go) with a $500 initial retainer and $200 discount hourly rate. The attorney also offered a payment plan with automated monthly credit card payments. Angela decided this met her needs.

When Angela connected with her new attorney over the phone, her attorney said she had prior experience with Buttermaker. Without criticizing him directly, she urged Angela to beware of attorneys who are “churners”: working the parties to a frenzy in order to jack up their legal fees with prolonged litigation.

Together, Angela and her attorney prepared the initial documents for a Dissolution with Children: a petition, case information sheet, summons, waiver of service and return of service. These JDF forms could be downloaded from the Colorado Judicial website.

Angela’s attorney had Angela prepare the initial drafts and email the drafts to the attorney. The attorney reviewed them and quickly got back to her with strategic suggestions. Angela mentioned that the self-help clerk had given her several additional forms including the parenting plan form, separation agreement form, final decree and others. The attorney explained options for preparing these forms down the road.

Angela decided that Art would probably agree to waive service and had her attorney arrange to have this happen at her office, with Angela absent. The attorney was able to e-file the forms with the court.

That evening, Art Aingel and Draco DeVille met at the local sports bar. Art explained that he had agreed to waive service.

“Well, whatever you do, don’t hire an attorney,” Draco continued. “You can do this all yourself. Save a bundle. Or hire a mediator, which is the exact same as an attorney, but cheaper and — get this — represents both of you. Oh, and do not put in a response. Don’t have to! Just saved you about $199 in filing fees right there and all you have to do is buy the next round.”

QUESTIONS FOR NEXT MONTH: Should Art Aingel file a response to the petition or skip that step? Should he hire an attorney or go it alone (also referred to as pro se)? Is it true that a mediator can represent both parties? Stay tuned for next month’s newsletter or call me if you cannot wait for the answers.