The media loves to present flashy headlines about Social Security, but they often get their information wrong or present an extreme example without a 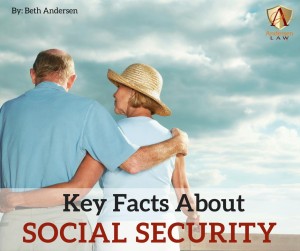 balanced explanation. Social Security facts are based on reliale sources, not flip comments meant to alarm viewers or readers.

In order to better serve my clients, I regularly attend trainings on issues affecting my clients. Because of my focus on elder law, one of those areas is Social Security. Here is some of what I learned at the latest update on Social Security.

When do people claim Social Security?

According to calculations from the Social Security Administration, more people claim social security at the age of 62 than at any other age. 42 percent of the men and almost half of the women claim it at 62 years of age. That is when you get the LOWEST amount you can.

Between 65 and 66 is the second most common age at which people claim these benefits.

Why is this? Because people want to maximize their enjoyment of these benefits. As they get older, they perceive themselves as being less fit, healthy, youthful and able to enjoy the benefits.

Now, when you ask someone when they plan to retire, they say 65 or 70 or older. However, when there is an economic downturn, people lose their jobs. Unfortunately, despite age discrimination protections, the older workers are often among those most affected.

What Makes Social Security So Valuable?

Go to www.ssa.gov to get more information about your Social Security benefits.

Your rights are spelled out under the law so it makes sense to consult with a lawyer for details. Call Andersen Law PC at 720-922-3880 for a free consult!