Social Security: The End of “File and Suspend”

When spouses both receive Social Security Benefits, they have an incentive to maximize the benefit of the lower lifetime earner by allowing him or her to receive spousal benefits based on the higher lifetime earner.

On the other hand, the married couple also has an incentive to postpone the higher earner’s election to receive Social Security so that they get the maximum benefit. An election at the age of 62 years will be at a lower percentage than the full benefit at 67 years of age. 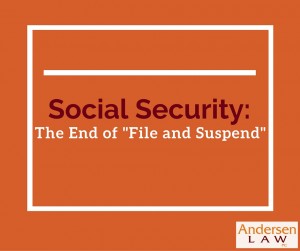 Someone came up with a clever solution: file and suspend. The high earner elects to receive THEN suspends benefits. This allows them to preserve the higher rate by only receiving SOME benefits at the lower percentage. Meanwhile, the low earner spouse dives in and starts getting the revved up spousal benefits, having no incentive to postpone because a smaller percentage of the bigger pie is better than 100 percent of their own small pie.

It was quite clever until a big party spoiler known as Congress closed the gap. If you already filed and suspended, you are grandfathered in. If you are 66 or older by May 1, 2016, you may still file and suspend.

There are other restrictions as well. Contact me to get the details and see how they affect you!