If a person is considering filing for divorce at the end of the year, there are a lot of things at stake, and sometimes a person can end up spinning in circles deciding whether to file this year or next. 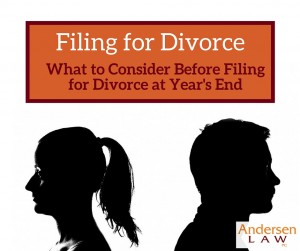 I always tell my clients that they should live their life first and consider the legal strategies second. This is because it is often difficult to predict how a strategic legal choice will play out in the long run. On the other hand, if you are making long-term choices authentically based on your own values and goals, then the legal decisions will automatically fall into place based on the things that are truly most important to you.

And if you’re living life the way you truly want to live it (rather than trying to manipulate everything you do just for a legal result), you will be able to handle the stress of the legal situation in a much calmer and more natural way. This helps the case more than you can imagine.

I have also observed the people are not as good at legal tricks and manipulations as they think they are. People who spend a lot of energy hiding money or trying to pull a fast one usually would’ve done better if they had just buckled down and did the fact-finding work and followed the rules. They waste energy trying to trick everyone, and it usually does not turn out the way they planned.

With that in mind, here are things that you can consider when deciding whether to file for divorce at the end of one year or at the beginning of the next.

1. HOLIDAY CELEBRATIONS: Many people decide to get through the holidays and then file at the beginning of the next year.  I’m not sure that a holiday walk-through with the intention of filing for divorce shortly thereafter is going to be the most fun holiday for anyone. On the other hand, no parent wants to be the one who wrecked Christmas for everyone by filing for divorce the day before. The holidays can be a time of busyness and it makes sense not to add one more thing.  Sometimes, I can’t help but wonder if couples are also thinking that maybe that one magical holiday will be enough to get the marriage back on track. If this is the case, why not give it a shot, because you may always wonder if that would have worked.

There is another side to this issue, however. Holidays for some can involve drinking and stress and running up huge bills on credit cards for gifts, travel and other holiday traditions. This kind of pressure cooker can lead to arguments, fights, lashing out and even the police getting involved. This happens more than you would suspect. And don’t think this is limited to any certain walk of life. People in all cultures and all economic levels can end up with an arrest or protection order being put in place over an extremely stressful holiday period. If you anticipate this sort of holiday chaos, then putting some certainty in place beforehand may be the right thing.

2. TAXES: It’s important to know that your tax filing status is based on whether you are still married at the end of the year. So if the divorce is not final by the end of the year, then you will still be able to file as a married couple for that year. This means that filing for divorce may not necessarily affect your tax marital status for that year. In Colorado, filing in December does not make it very likely that the divorce will be final until the following year. We have a 91-day cooling off period and judges are not inclined to rush a divorce through in less than a month. But there are other tax marital status issues to consider and you may want to consult with counsel.

In Colorado, divorce usually requires disclosure of the last three years’ income tax returns. So the date of filing does not necessarily affect whether you need to turn over your tax return for that one year.  But each case has unique tax disclosure issues to consider. Again, you should consult with counsel and consider what is best.

And there are other tax consequences to consider. I strongly urge you to talk to a tax accountant confidentially before deciding whether to file in one tax year or the next.

3. BONUSES AND PAY INCREASES: In some states, the date of filing for divorce determines whether something is a marital asset. In those states, it makes good sense to file in January so as to avoid the bonus being considered a marital asset and to file in December if you would like access to the asset. Colorado is NOT of those states, however. On the other hand, moving things along early could lead to a quicker order to access to the bonus or to prevent it from being spent or hidden. Again there are other issues to consider when it comes to end of year bonuses and this is a very large factor in deciding when to file.

4. NEW LAWS EFFECTIVE ON THE FIRST OF THE YEAR: In Colorado, Jan. 1, 2014, meant that the new maintenance statute went into effect.  This was a major factor for many people in deciding whether to file in that year or the prior year. Each year brings new changes. While most are not of that magnitude, it is definitely something that a party should consider in deciding went to file for divorce. Statutes often become effective other times of the year such as July 1, by the way. So the issue of a new law coming into effect is a constant one and does not happen only at the beginning of the year.

5. FRESH START: Some people want to start the year fresh, and for them that means legally ending a relationship that has in fact ended months or years earlier. This is also the time to gather new financial and work documents for the year ahead. A clean break, and ideally a divorce initiated and completed in the same year, can make sense as well.

When you call me for a free consult, I go to work right away. I will start giving you suggestions immediately and I will give you homework in that phone call to get you in the right direction. Questions about whether to file in one year or the next are completely appropriate for that kind of phone call. I can get you started and I’m happy to hear from you as you make this life-changing choice.